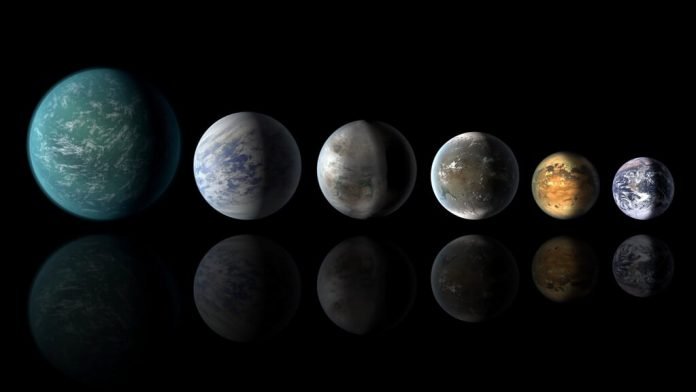 We all know that NASA’s journey to finding another “Earth” has led its scientists to discoveries of many Earth-size planets orbiting in the habitable zone around a sun-like star. In the recent past, NASA’s astronomers with the help of Kepler Space Telescope confirmed the existence of planets of the same size as Earth with habitable characteristics.

As part of the continued search, NASA astronomers have discovered a single star system which is 40 light-years away, with seven Earth-like planets possessing similar qualities. With relatively warm climate accompanied with rocky terrain, all the seven planets have promising signs regarding the existence of life and water in them.

Trappist-1 is the star at the center, but it has no similarity with the Sun as it is a profoundly cool dwarf star. It is tenth the size of our sun, reflecting only a quarter of the radiant heat. Unlike the Sun, even its planets are far away, the closest one taking a year to orbit the star.

Though the discovery is a milestone achievement for NASA, the space research center has made it clear that although the finding is huge, the expectation of alien life in those planets will be early to comment on. It will be a matter of time to conclude at more findings including the presence of gasses like oxygen and more. For now, the discovery is commendable, and NASA is making every effort possible to take their mission to new heights of achievements.