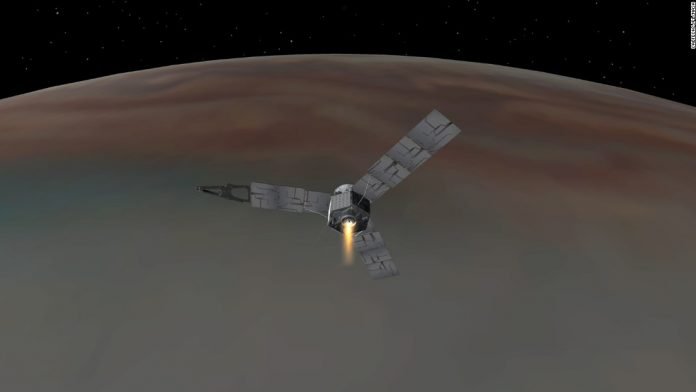 After a prolonged wait of five years, NASA engineers finally got to witness the success of their mission Juno spacecraft. Launched on a mission to study Jupiter’s composition and evolution, Juno reached Jupiter’s orbit after a risky movement of slowing it down by firing a rocket engine so that it could be captured by Jupiter’s gravity turned successful. With this achievement, Juno becomes the first spacecraft to orbit Jupiter since Galileo which purposely crashed into Jupiter on September 21, 2003.

With Tuesday’s orbit insertion, Juno will do two 53-day orbits before performing another burn on that will bring it into a 14-day polar orbit. This type of orbit helps the spacecraft avoid any long-term contact with Jupiter’s radiation belts, which can cause damage to spacecraft electronics and solar panels.

With each close approach, Juno will be able to use its eight remote sensing instruments and camera to peep through the gas planet’s many layers for measuring their composition, temperature, motion and other properties.

On reaching the 14-day orbit, infrared and microwave instruments will begin to measure the thermal radiation evolving from deep within Jupiter’s atmosphere. These observations will complement previous studies of its composition by assessing the abundance and distribution of oxygen which will give insight into Jupiter’s origin and help unlock secrets our solar system.

At a press conference after the spacecraft’s successful arrival, Scott Bolton, Juno principal investigator exclaimed, “NASA did it again. We’re there, we’re in orbit. We conquered Jupiter.”

As per future plans are concerned, NASA plans to run Juno till February 20, 2018, if its not damaged by then.

Turning my passion into profession, I have been successfully penning down my knowledge and understanding in the field of marketing into creative pieces for quite some time now. Be it economic changes or emerging trends, my blog covers every nook and corner of the B2B and B2C industry.